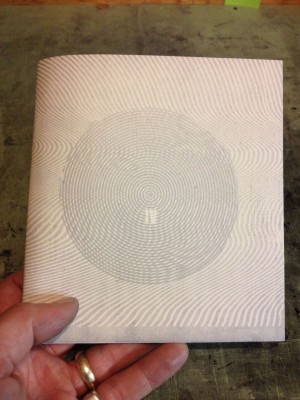 well, it's done. you can order it here.

here's what it is:

1) 56 pages, on a couple different paper stocks, printed in 8 colors on the Risograph, and then metallic silver on the offset press.

(+ $2.25 postage, but to make up for that, you will get a small 5 x 7" 2-color riso print, each signed and numbered. these ONLY come with an order direct from me, and won't be available anywhere else)

why started out with the idea that 'i'll just bang out a zine, quick and easy'', turned into the single most involved, complicated thing i've ever produced. 6 months turned into 18 months. i plan to not read it for a while, but right now-- i feel great. it's as naked a book as i've ever done, and it is one of the most absurd...objects i've ever seen.

and, i feel like that needs some explanation; because if you feel like you are ordering something normal, you need to know that you are not. if you engage this thing like you would any book you get at a store, you are going to be unhappy. this is a different deal-- not a little bit, but all the way.

this book is NOT for everyone. if you are looking for a passive, easy reading experience, this is not it. that's sort of what the book is about. there's a reason the text is so difficult to read, there's a reason a CD is included instead of a download code. and it's not difficult for difficult's sake-- it really does have to do with the content of the book itself. do i think every book should be like this? hell no. but this one is.

if all this sounds like an apology, let me assure you; IT IS NOT AN APOLOGY.

seriously-- there are significant portions of this thing that you can only read if you hold it up to the light at a really, really precise angle. i've never seen a book like that, and (mostly) i did that on purpose, for a specific reason. but make no mistake--it's a pain in the ass. there is a very, very large group of people in the world who would regard reading a book like that as a pointless, ridiculous, and maddening endeavor. those are people who should  NOT send me $20. you will be bummed and so will i. but if you reacted to that last sentence with "holy shit. are you kidding me? that sounds insane", well, click that button i got something for you. because it's 2014, and i really felt strongly about making something pointless, ridiculous, maddening, and beautiful. it's about failure and obsolescence and fear and hope and why anyone in this day and age would spend time and energy making and disseminating obscure printed sheets of paper with stuff on it. and why that still matters, even if all signs point  to the contrary.

you might like it, you might hate it; either is ok with me. but one thing is for absolutely certain: this is a very odd little object, and an object that can't accurately be described as a zine, a book, a commercially produced item, or even a comic. it's all those things, i guess, but also it's not. to me, it feels like no one else would make something like this, the way i made it (i'll do a post next week about HOW i made it). it doesn't look like it's trying to be something else, because it isn't. most of the time, the form of "the thing" is just to contain the content, or the ideas inside. with this Recidivist, the form IS the content, and vice versa; they are not separate. i'm not trying to sound conceptual or academic, here: i'm saying that's what happened.

it's a pretty indicative document of what and who i am, and where i've ended up; from the content to the production to every damn thing you can name. so, it's important to me that, by and large, that comes full circle; i made it, and given the nature of it, i'm the one who's going to be selling it.

i'll probably send some to the couple stores in the country that would like to have some, and John P's Spit and a Half distro, and i might send some with some pals to sell at shows or what have you. but, basically, the way i want to sell these is to people, right here. me and you. this isn't a Kickstarter and it's not a plea for help. i'm not a salesman and this isn't a product. if you want one, i want you to have one, and I'm gonna send it to you. it means i sent it to a real human being, and that's the way i like it.

you get to a point where you are faced with the reality of quitting or doubling down. guess which one this is.

FAIR WARNING-- please DO NOT send it back for any of these reasons:

it is physically difficult to read.

yup. there are literally MILLIONS of books that are very easy to read, physically. this is not one of them (but maybe if you get through it you can find out why). i'm not being snotty or catty. it's just what happened. what the hell kind of person would spend a million hours making a book you can't read? me, i guess. someone's gotta do it.

some (or many) of the pages look weird, or blurry, or misregistered.

yes. you are correct. the riso has anywhere from a 16th to 1/8th inch variance on any given sheet, and when you are lining up 6 colors, each on a different pass, it'll do that. you could look at this 2 ways:

2) it's how it got made. and that is part of the deal. i could have had it printed professionally, BUT I DIDN'T. that's what the book is about. it didn't go through a bunch of peoples hands, in a bunch of different places/shops/countries to get made, it just went through mine: that's what makes it what it is, and that ludicrous amount of labor is why i had to make it $20. you are not buying a book at the bookstore, you are buying something somebody made.

saying that every single copy is different from the others is not a stretch, it's a fact. do you own many books like that? i don't.

should i listen to it while i read the book/ comic/ whatever?

well, you sure could. i would ask that you listen to it pretty loud, as it seems to work best that way. but i'll never know either way, so do whatever you'd like.

the ink sort of smudges and comes off in my hand.

yes, i know. welcome to Risography.

* i'm not saying how many i made, on purpose. sorry.

i've had conversations with folks that say "well, if it's over X amount, it really can't be regarded as a handmade object". and i understand that impulse. i like that too.

how many did i make? well, i sold about 2500 of the last Recidivist. lets just say it's way, WAY LESS than that.

i guess everyone agrees that if you personally MADE over a hundred of them, it's no longer a handmade object, right? it's something else then, so we don't know what to call it. but maybe we should, because (as i've mentioned about 3 times by now) i wrote, drew, recorded, personally printed it EIGHTY THOUSAND TIMES and then hand assembled each one.

the psychology here is that "handmade" = scarcity; that you are buying ONE OF ONLY A VERY SMALL AMOUNT. that's collector shit, that's a fetish deal. is it that it's handmade, or that you're part of a small secret club? come on, be honest. what defines that? because i printed 72 different separations to make this book. that means, on average, that each page of the thing was run through the risograph 9 separate and distinct times (and at least once for the silver). that plus the folding, collating, stapling, sourcing and hauling around the paper, ordering ink and plates and supplies, stuffing each cd into a sleeve and gluing it in, never mind writing drawing and printing the thing. i mean, come on.

anyone who says this isn't handmade because there's more than 50 of them can, in this case, go fuck themselves.